Toss a coin to your Netflix – the moral ambiguity of The Witcher TV show was not the only video game adaptation attempted by the streaming giant over Christmas. Saccharine family sit-com Fuller House also offered a Rocket League-themed episode. Can we learn anything from either?

Streaming giant Netflix decided to make the centrepiece of its 2019 Christmas launch schedule an adaption of the somewhat nihilistic book and videogame series, The Witcher.

The show, in true festive form, is a fantasy/western hybrid about the tenuousness of terms such as ‘hero’ or ‘monster’ in a grim world where morality is often a privilege for the wealthy and powerful to define and indulge in.

For everyone else, there is the sword carrying mutant Geralt of Rivia, who has to try and find the nearest possible thing to doing ‘right’ in a lawless land of supernatural creatures and everyday cruelty.

In Geralt’s world, if a demonic curse doesn’t get you, a corrupt landlord or systematic poverty will probably do the job just as effectively.  So where does a hero start, if at all?

Much like the videogame, the series deals with how complex worlds rarely leave us simple options. This, of course, makes being a hero a bit of a drag.

But unlike the games, Geralt – played with chiselled charm by Henry Cavill – is something of a finished product. A gruff, stony voiced and jaded warrior that has a clearly defined, if imperfect moral code. Sometimes, when he is lucky, this moral code can almost make him appear a heroic avenger of the downtrodden, rather than a hardman for hire.

By comparison, the videogame adaptations of The Witcher force the player to learn the dangers of throwing yourself into a heroic quest without getting the all important context of who you are helping.

The latest title in the game series, the Witcher 3, was lauded not just for building a sprawling fantasy open world of war zones, beautiful castle cities and death swamps, but also loading these locations with moral ambiguity.

Like many open world games, outside of the overall epic quest, the digital Geralt can choose to ride into towns and take up quests of his choosing that may provide some much needed loot or items.

Why not take a simple quest to uncover a petty thief in a small town? Of course, this might lead to the execution of a well meaning, but desperate man for the crime of taking some bread. With the quest complete, you get the promised reward, but you may not like the unintended consequences of such actions.

Likewise, you might end up taking up the call of a heartbroken widow. Why wouldn’t you want to bring some justice to the savage perpetrator of his family’s brutal murder? Unfortunately, this leads to the realisation that the quest giver is himself the monster, cursed at night to become a beast with no control or sense of his humanity left. Ignorance can be bliss, even to a piece of code.

Geralt in the series, has learnt many lessons about the impotence of trying to be a hero loved by all. He is just a tradesman looking to make money by keeping society plodding along. He might be able to help with a supernatural horror, or die trying, but resolving all too human horrors are often beyond his remit or abilities as a swordsman.

Unlike gamers that find themselves starting coming to the series, Cavill’s Geralt is wary to throw himself into a seemingly simple fetch quest and be caught off guard by its wider complexities.

He also, to be fair, doesn’t seem likely to lose his horse in a wood, set himself on fire, or fall off a cliff while trying to admire the Witcher 3’s lovingly realised scenery of cursed castles, Italianate forts and vast prairies.

The moral ambiguity of the series doesn’t have the consequences of the game. To some, this might seem a little redundant.

Sometimes it seems adaptations of games, even if lovingly realised, are a form of advert for the original source material and books.

After watching Geralt navigate seemingly impossible moral choices, what not have a go at it yourself? This can be done while levelling up your abilities to try and bring some passable order to the chaos of Geralt’s world.  BY the end of the game, the player may indeed appear to be a passable Witcher.

But the Witcher was not the only adaptation of a videogame attempted by Netflix over the Christmas period.

Ready Player Fuller, the 62nd episode of the streaming service’s revived sit-com Fuller House, used the popular videogame Rocket League as the centerpiece for a plot about trying to engage children through the alien world of their passions and interests.

Fuller House is a family-oriented show that serves as a sequel to the original Full House, this time with a somewhat gender-swapped cast. Three quirky women, now grown adults, try to do their best to live up to their own three quirky father figures in modern San Francisco, all to the adoring cheers and hollers of a live studio audience.

It is set in a parallel San Francisco. A city where money, the complicated need to pursue our dreams and desires without breaking hearts, and finding contentment and a purpose in life are minor hurdles that can be solved within 30 minutes.

That such a show would attempt to say something about the pressures of trying to be just an average teenager might seem understandably alarming. What lessons can you take from such a strange facsimile of reality?

Yet the saccharine show, made up of attractive and creative people that always find impossibly neat resolutions to infidelity, addiction, loneliness, infertility and the related existential dread, makes a passable attempt at looking at the role of games and escapism in peoples’ lives.

D.J. Tanner, a quirky vet who raises three children in her large, rent-free townhouse with her sister, best friend and numerous former and current lovers, finds herself using Rocket League as a means to engage and understand her teenage son.

With a copy of Rocket League, a headset, and a Nintendo Switch – she pretends to be a fellow teenage boy and gaming partner to help her son qualify for a nearby Rocket League tournament.

The game serves as a platform to discover more about what a modern teenage boy hopes for from his life. The show illustrates this with footage of audacious Rocket League goals.

For a series where every piece of dramatic tension is resolved through a simple positive conversation with a parent or guardian, the show takes a strangely progressive approach to how games for some can be a means to try and better understand each other.  What if games somehow offered people a way to try and share the challenges and complications in their lives, whether with close family, or strangers living on the other side of the world.

Per Fuller House convention, D.J. ultimately comes clean to her obviously perturbed son about lying over her identity, and through the means of 30 minute sit-com resolution, they decide to team up in person as a mother and son Rocket League team and learn to accept sometimes unrealistic expectations of each other. Insight gained through a simple five minute bout of Rocket League might sometimes tell us more than earnest attempts to have a heart-to-heart on our ambitions and deepest fears.

As a videogame adaptation, there is obviously a fair amount of poetic licence to the episode,. Not least in pretending a Nintendo Switch has some form of in-built way of talking to friends and other players. 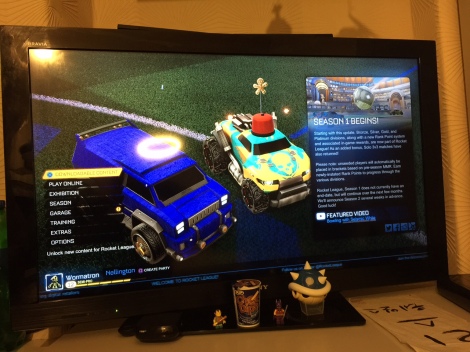 But in the neat, semi-perfect world of Fuller House, the show recognises that saying simple things to those closest to us can be massively complex, if not impossible for some.

Games, seemingly the preserve of moody teenage boys – a not entirely unfair cliche – can have a value beyond being throwaway entertainment as a tool to communicate and share – at least according to the episode

Understandably, the show doesn’t touch upon how games can both simultaneously be a tool to open up to wider communities, while also shutting off the real world around us. It also fails to look at toxic online communities and the real world dangers they pose alongside the chance for finding solidarity and companionship with like-minded people through games.

The same duplicity around digital identity in the show, played for a few chuckles and an attempt to do some funny accents, is at the centre of many parent’s fears about children in an increasingly online world.

As the Witcher shows us, when having to live with the complexity of getting through any particular 24 hours, many of us would rather look for simple solutions and heroes, rather than try to make decisions in the complex, compromised reality that we live.

Videogames are demonstrably both good and bad for us.  In partly understanding this, Fuller House found itself flirting with a much richer, nuanced world. Not a bad thing for any videogame adaptation.