My Friend Pedro, released in 2019 on Nintendo Switch, developed by DeadToast Entertainment & FIFA 04, released in 2003 on Playstation 2, published by EA

The gameplay similarities between a 16 year-old PS2 football simulation and a recently released 2D bullet-time stunt shooter on the Switch may not be immediately obvious.

One, in the case of FIFA 04, was an attempt to introduce more realistic mechanics and movement into one of the world’s foremost video game franchises by allowing a single player to try and control two separate players simultaneously.  In theory, this would allow one person to recreate the sense of an elite sportsperson working sympatico with another.

My Friend Pedro meanwhile, sees players control a crash helmet wearing lunatic that flips, dives and athletically dispatches a literal army of gun-totting hoodlums by dual wielding pistols. You are also supported with help and guidance from a sentient banana that may or may not be the manifestation of madness itself.

Yet in their own unique ways, both games have sought to capture and recreate a hyper athletic sensation of acting beyond the normal constraints of a human being.

To the player, this effectively involves doing two things at once – something that is easier for certain types of people than it is for others, at least if broad gender stereotypes are anything to go by.

But in-game, this multi-tasking can become something far sexier or impressive. In FIFA, the touch of a few buttons can allow the player to control multiple athletes. When spying a cunning pass, the player, if skillful enough, can control another teammate to make a split second sprint into some unoccupied space on the virtual football pitch. It is in theory, as if watching athletes at the top of their game acting in unison to your command.

For My Friend Pedro, the character can in most given levels, leap between bullets, while riding a zip line before breaking out into a triple somersault and dispatching multiple goons with some well-timed head shots – four shots, four kills.  That is again, if the player is competent enough.

These games both seek to empower the player to live out their fantasies of operating beyond the abilities of a mere mortal.  However, it is My Friend Pedro that is able to much better get the design compromise between ensuring sufficient challenge with the reward of performing complex, sometimes wonderful feats of athleticism.

The game is hard enough to master, particularly in terms of trying to match some of the in-game skills seen in pre-release demos of My Friend Pedro. Yet somehow, it is accessible enough to let rookie players to make a mid-air gun shot ricochet off of some kitchenware and incapacitate the bad guys.

My Friend Pedro, with its mixture of Hong Kong and Hollywood action movie tropes is much better at facilitating in the player a sense of being much more in control of multiple complex actions within a short-space of time.

This is done in part by allowing the player to toggle a limited slow motion ‘bullet-time mode’ where the game’s events and dangerous projectiles move at a much more perceptible pace.  Think of it like being stuck in the movie, The Matrix. Bullet time grants the ability to also perform somersaults and twists that can snake the player out of the way of bullets, knives and almost any other harm spare explosions.

This allows for a more thoughtful and strategic approach to targeting and shooting while flipping through the air, creating a challenge in ensuring that slow moving targets are within your sights and can be targeted by your left or right hands.

The challenge is to get the maximum number of shots within the minimum number of moves possible, ideally while looking good doing it. 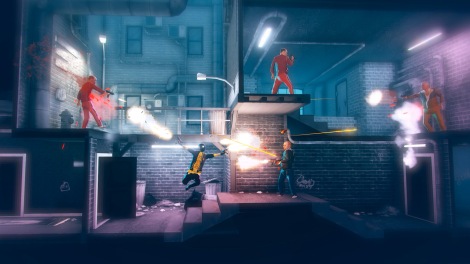 The average human mind is of course not able to facilitate such complex movements in the tiny amount of time it takes to flip your legs over your head. To aid the player in this impossible task, a second button can be held that will lock your character’s left or right arm on a nearby target, while the player must focus their second arm on the weak, fleshy part of another bad guy before they hit the ground.

With practice and concentration, a player can realistically take out four, five or six bad dudes while jumping from a ledge or through a window in some audacious stunt that would not be out of place in the most ludicrous of Hong Kong action movies.

A tale of two eras

Modern game developers are obviously able to do so much more than the industry was technically capable of in 2003 with regard to gameplay mechanics.  We now understand that valid, thoughtful games can come in a variety of forms and scale, whether as a retro throwback, or a state of the art immersive roleplay game in a 3D world.  But programmers have long been experimenting with new mechanics to empower a player beyond the constraints of reality and human limits.

In the case of FIFA 04, the inclusion of a function to allow the player to use their second analogue stick on the controller to take control of a another player and try and break free of a rival was an interesting experiment in simulation.  Perhaps in some ways, it was both too ambitious and too realistic in the complexities of doing multiple tasks at once.

To successfully recreate the sensation of having a second footballer reacting to your commands, the players themselves had to try and sync the complex movement of two separate characters, all while not losing the ball to computer or human opponents.

Ultimately, the use of the dual controls cannot compensate for the very human limitations some individual players have that may make them incapable of maintaining two separate cases of movements at the same time.

In short, it was very hard to realise the game’s aspirations to create complex and coordinated movements to break through a defence and get on the end of the ball.

Sports simulations, or action packed violent extravaganza videogame are largely built on the appeal of letting mere mortals live out fantasies of being an elite or semi-professional sports player, or a shit-hot assassin that can punish evildoers with style and elan.

For the programmers charged with creating these virtual fantasies, a good game rewards practice and perseverance with a sense of mastering some incredible skill – without requiring the requisite skills in real life.

My Friend Pedro can still leave you feeling like an idiot after landing on your head when attending to eliminate some gangsters during a 580 spin through a skylight. Yet the game’s mechanics still reward practice, particularly after some stylised in-game stupidity.

Yet FIFA 04, and it’s attempt to do something drastically different served only to remind casual players and longstanding fans that they would never be a top end footballer.  That they could never begin to think not only about their ball between their feet, but their team mates around them.

It was a brutal reminder that athletes often just think and act differently than the average fan can comprehend.