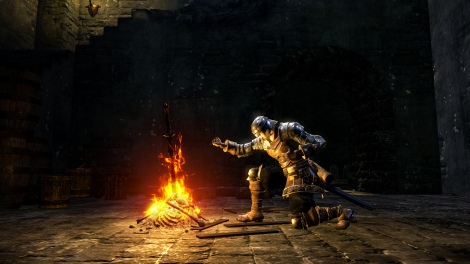 “The struggle itself … is enough to fill a man’s heart. One must imagine Sisyphus happy”

“Ain’t about how fast I get there,
Ain’t about what’s waiting on the other side,”

If you stripped away Dark Soul’s humongous dragon, murderous ghosts and most definitely its plant demons, you might find the game’s slow-burn approach to progression and character growth feeling agonisingly and satisfyingly like real life

The philosopher Albert Camus theorised in his famed essay ‘The Myth of Sisyphus’, that life was a slow uncompromising grind, akin to rolling some massive, weighty rock up the same hill again and again without any resolution beyond death itself.

He argued that any small solace that an individual gets in life comes in those temporary moments of respite we get. Meanwhile, the bloody great rock has rolled back down the hill, leaving us to repeat the toil and struggle all over again, until the next precious, fleeting rest.

In Camus’ view, any sense of progress we may feel as humans will be small and incremental. Sometimes, it may be barely recognisable as we undertake the same chores – pushing our way slowly through existence.

Camus’ use of ancient Greek myth and the tale of Sisyphus to convey that essential  question of our purpose in life has since been rebadged and considered in endless examples of pop culture and art. This can be seen whether in a 2005 chart topper by a rock band from the English town of Staines, to movies, comic books and just about any forms of storytelling.

Truly it is a universal concept in humanity’s ongoing attempt to understand itself. It makes sense then that videogames, whether intentional or not, would also touch on Camus’ thinking on existence.

It is important here to state that Camus has never played Dark Souls. His death in 1960 would have precluded him from enjoying From Software’s most influential ‘Souls’ game, which was released to a range of platforms in 2011.

Videogames would have been a tremendous source of fascination for one of the world’s foremost absurdists. Dark Souls, doubly so.

The game’s influence, marked by its critical acclaim – and most importantly massive sales – has led to a range of sequels, spiritual successors and remakes, as well as a host of imitators.

But what is so revolutionary about a game that mixes a dark, brooding aesthetic and punishing, precision-based gameplay, that is then mixed together to create on an endless cycle of repetition struggle, death and theoretically, eventual success?

How did a game whose premise was dying – an awful lot – become so popular in an increasingly broad gaming market?

Even if you never reach the game’s end, a player must believe its character will reach its goal in some form of existence.

Even the most punishing and impossibly gargantuan enemies can be overcome, if you have the perseverance, either in the form of built ups skills, hardened armour and equipment, or just a shed load of magic and weapons.

Many modern videogames make use of skillpaths, a system where character progression is based around choosing specific skills that you wish to hone. With each new level of experience, you are able to improve skills, strength or some character ability to suit your style of play.

In many games, the chance to gain new skills with accumulated experience points or overcoming specific objectives is a mechanic that rewards intense levels of play in order to unlock new abilities. These new abilities can border on the superhuman, or at least Mcclane-nian – making the player’s eventual triumph almost inevitable.

If you play for long enough, you could be a master of all things is the common videogame trope. It is a system that has been a staple of games for decades.

Dark Souls also has its level system, where the collection of souls from your vanquished foes can be accrued and used to purchase some new, very gradual improvement in your physical or mental prowess.

This can range from improved intelligence to better use magic, physical strength and defence to make you more battle ready, or simply being able to carry larger amounts of weight in the form of armour and weapons that is seemingly vital to just stand up and move properly.

Like many games, a difficult enemy or boss can be made easier by playing through the games levels once again to get that all important additional level up. But the progress is extremely slow and gradual.

Extra strength comes in what seem that the slightest increments, where a commitment to approve your ability to carry weight, makes life only slightly more comfortable and mobile.

Should you die having accrued a massive number of vital souls that are essential to purchase character development, the player is given one last chance to recover them from their last point of death, otherwise, hours of gameplay can be lost. The player is then left with nothing but regret, memories, and possibly some wisdom on what not to do next time.

Much as in life, our own sense of progress as individuals and even as a species can feel glacial in trying to meet our main aims and objectives. We all try to grind through existence, looking in some way to improve and get ourselves better acquainted with the challenges we face. Yet life’s challenges, and our ability to deal with them, can at times feel insurmountable.

Unlike most videogames, experience and improving ourselves in real life can feel like a mess of unfulfilled or abandoned skill trees. A character such as Laura Croft in the latest Tomb Raider series can become a linguistic genius or world champion endurance runner in a handfull of steps.

There is no clear indicator of mastery in Dark Souls. You could seemingly improve your character for ever, albeit it in an increasingly difficult and arduous way.

Life doesn’t naturally break down our skills and abilities into similar easy steps. Sometimes, years of toil in trying to learn to play a guitar do not necessarily make us a level 16 musical genius.  Sometimes our aspirations for greatness go unfulfilled and we have to make peace with what is left.

We are as equally defined by these unfulfilled paths and personal failures as we are triumphs. Dark Souls seems to understand the deeply personal nature of struggle than many other games.

Writing on Dark Soul’s enduring appeal for the Guardian in 2018, Rich Stanton noted that the remastered game’s appeal was not in conquering the in-game world of Lordran and its monstrous hordes, but surviving the experience and simply trying to understand the setting.

He wrote, “It is opaque, even mystical; true comprehension always feels just out of reach.”

“Lordran is a ruin, an abandoned remnant of what was once the gods’ playground. The bosses can be inscrutable monsters, but more often they are mighty wrecks of eras long gone: a giant wolf guarding her master’s grave; two knights standing guard in the throne room of a desiccated reign. Eventually, you’ll meet the greatest minds, the shapers of this world’s history, all mad and feral.”

The sense of lassitude – of going nowhere in our lives with each passing day – is one of the theme’s people have taken from Camus’ absurdist work over a number of decades. It might also explain the appeal of a game such as Dark Souls.

Progress is there in the fantasy setting of the game, sometimes barely detectable – even after hours of gruelling game play.

At times, a player might feel that they could grind for near a hundred hours and still never be sufficient to get through the game.

And yet in a single fateful playthrough, where luck, a cache of hard earned explosives, or simply learning from the movement patterns of some ludicrous monster, the player can suddenly have done the unthinkable. They can have brought some malevolent giant to its knees.

It is for the player to decide if this seemingly endless grind has been worth it. In the meantime, you have to find some enjoyment in pushing further through the brutal game world.  The player must be confident that each very gradual improvement in skills and dexterity may be enough to overcome the next insurmountable challenge lurking in some dark corner of the game.

In falling short of perhaps ever completing a game that other skilled individuals can seemingly overcome in an hour, enjoyment for some players is to simply enjoy the struggle itself.

Camus, and the great philosophers that have followed in his stride in the intervening decades since his death, would surely have approved….